Let's Explore the Universe!
Is it small or large? Is it “infinite” or does it “end” somewhere? If so, what is beyond its outer boundary? How long has it been in existence? How it is created?

You dare to talk about, motion, speed, velocity, acceleration, distance, gravitation, time etc., etc., without having the faintest idea of your location on infinity in the universe. Try to find yourself...

In general relativity, an event horizon is a boundary in space-time beyond which events cannot affect an outside observer.

In layman's terms it is defined as "the point of no return" i.e. the point at which the gravitational pull becomes so great as to make escape impossible. The most common case of an event horizon is that surrounding a black hole. Light emitted from beyond the horizon can never reach the observer. Likewise, any object approaching the horizon from the observer's side appears to slow down and never quite pass through the horizon, with its image becoming more and more red shifted as time elapses. The traveling object, however, experiences no strange effects and does, in fact, pass through the horizon in a finite amount of proper time.

The word observable used in this sense does not depend on whether modern technology actually permits detection of radiation from an object in this region (or indeed on whether there is any radiation to detect). It simply indicates that it is possible in principle for light or other signals from the object to reach an observer on Earth.

In practice, we can only see light from as far back as the time of photon decoupling in the recombination epoch, which is when particles were first able to emit photons that were not quickly re-absorbed by other particles, before which the Universe was filled with a plasma opaque to photons. The collection of points in space at just the right distance so that photons emitted at the time of photon decoupling would be reaching us today form the surface of last scattering, and the photons emitted at the surface of last scattering are the ones we detect today as the cosmic microwave background radiation (CMBR).

The age of the universe is about 13.75 billion years, but due to the expansion of space we are observing objects that are now considerably farther away (as defined in terms of cosmological proper distance, which is equal to the comoving distance at the present time) than a static 13.75 billion light-years distance. [Davis, Tamara M.; Charles H. Lineweaver (2004). "Expanding Confusion: common misconceptions of cosmological horizons and the superluminal expansion of the universe". Publications of the Astronomical Society of Australia]

Does Universe end somewhere? What is beyond the “edge” of our universe?

The answer to these two questions is hard to understand without a detailed discussion of the birth of our universe … a violent birth that appears to have taken place 13.7 billion years ago in an event commonly known as the “Big Bang”.

The particle horizon of the observable universe is the boundary that represents the maximum distance at which events can currently be observed. For events beyond that distance, light hasn't had time to reach our location, even if it were emitted at the time the universe began. How the particle horizon changes with time depends on the nature of the expansion of the universe. If the expansion has certain characteristics, there are parts of the universe that will never be observable, no matter how long the observer waits for light from those regions to arrive.

A light-year, (symbol: ly) is a unit of length, equal to just under 10 trillion kilometers (about 6 trillion miles). As defined by the International Astronomical Union (IAU), a light-year is the distance that light travels in a vacuum in one Julian year.

The light-year is often used to measure distances to stars and other distances on a galactic scale, especially in non-specialist and popular science publications. The preferred unit in astrometry is the parsec, because it can be more easily derived from, and compared with, observational data.

The parsec is defined as the distance at which an object will appear to move one arcsecond of parallax when the observer moves one astronomical unit perpendicular to the line of sight to the observer, and is equal to approximately 3.26 light-years. 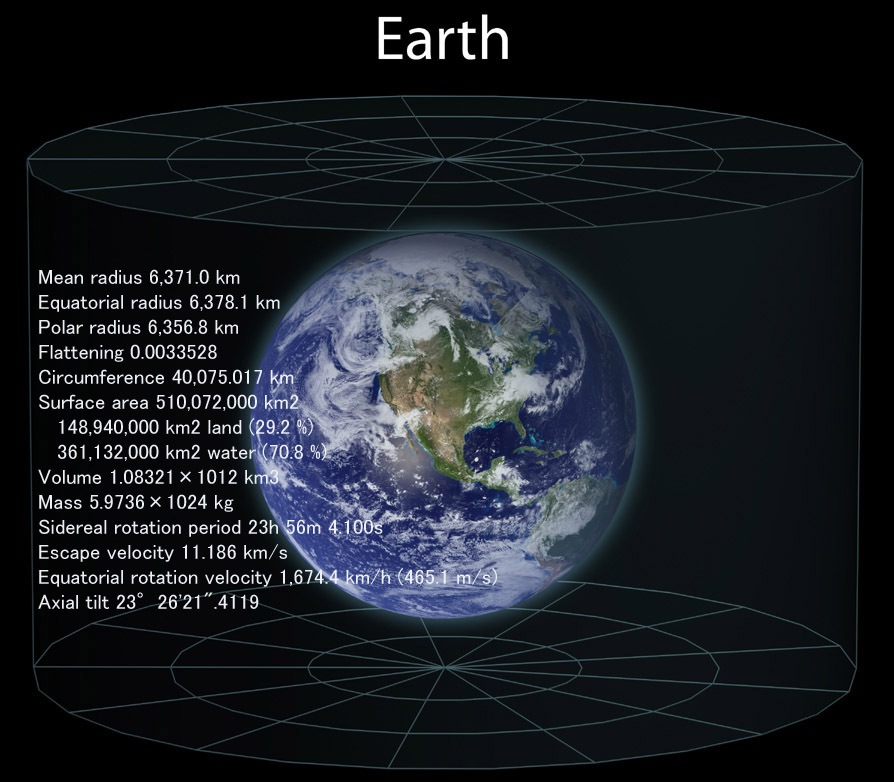 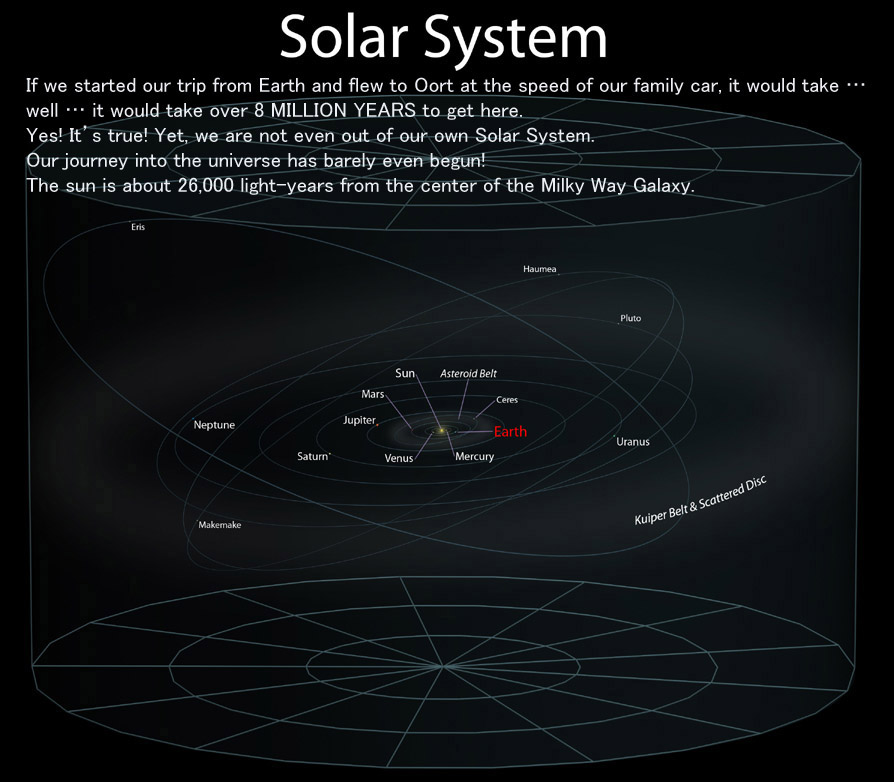 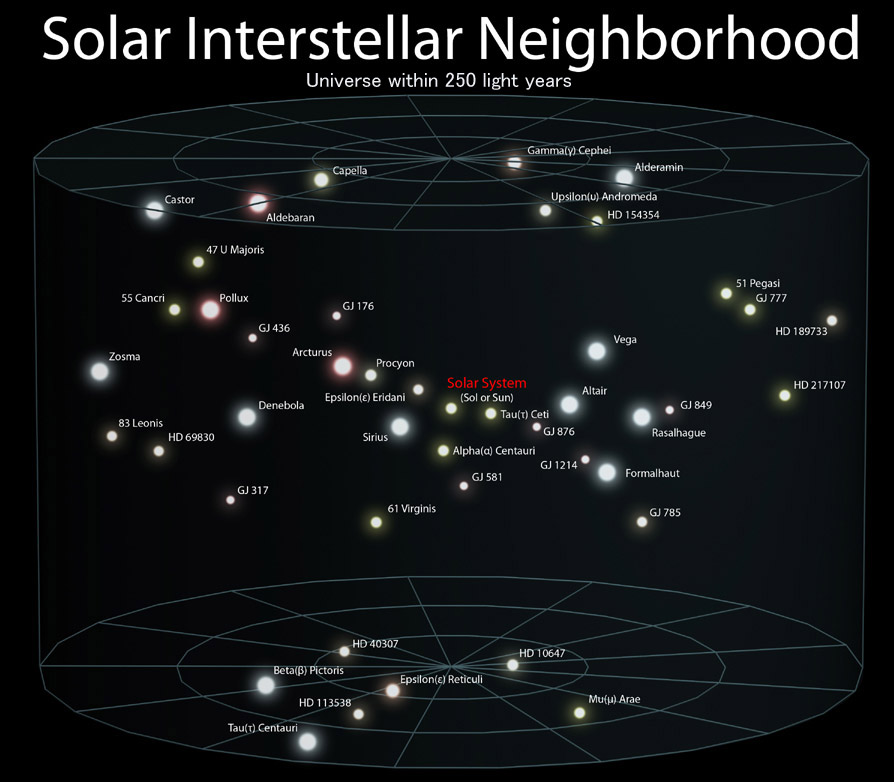 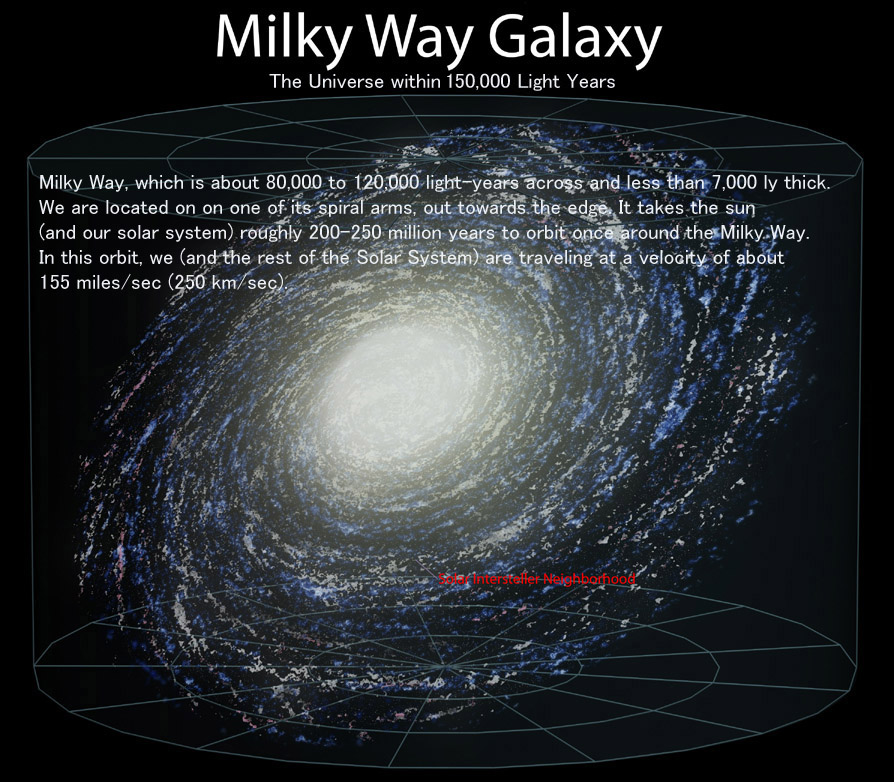 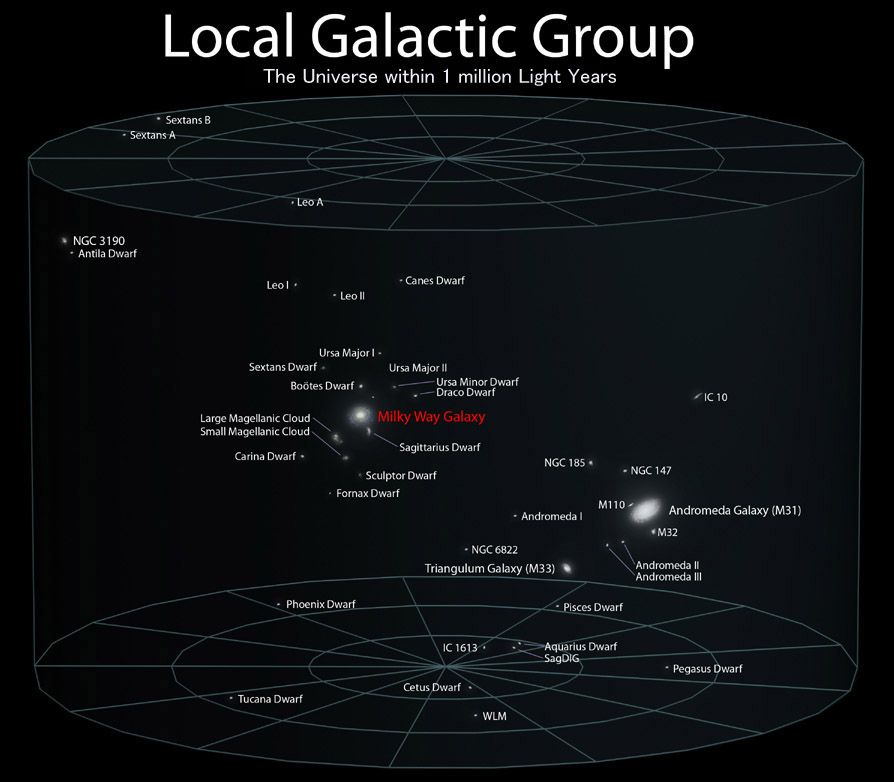 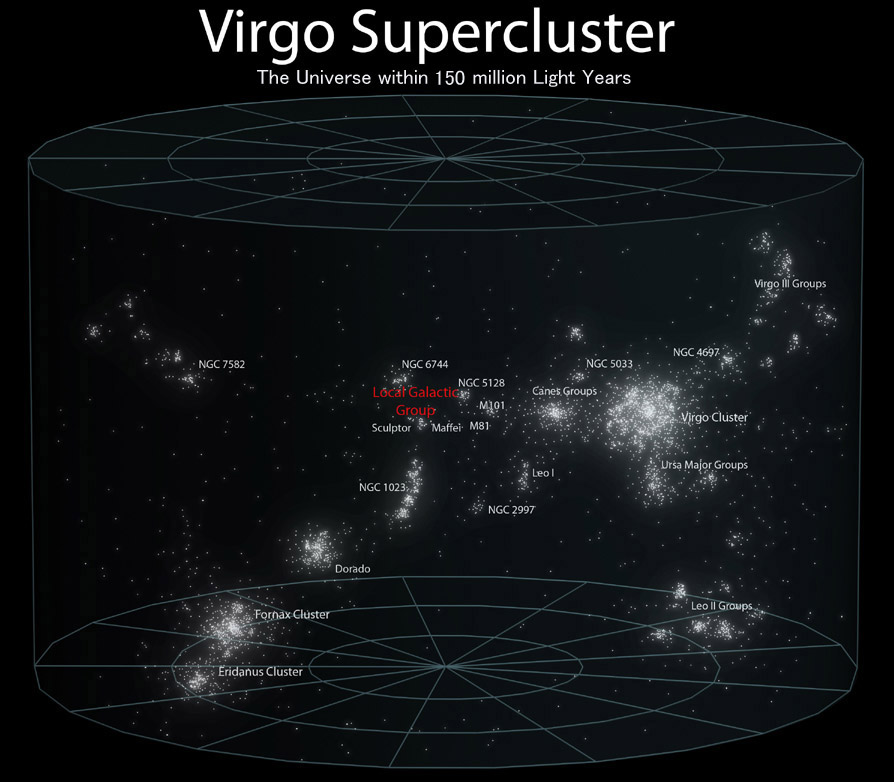 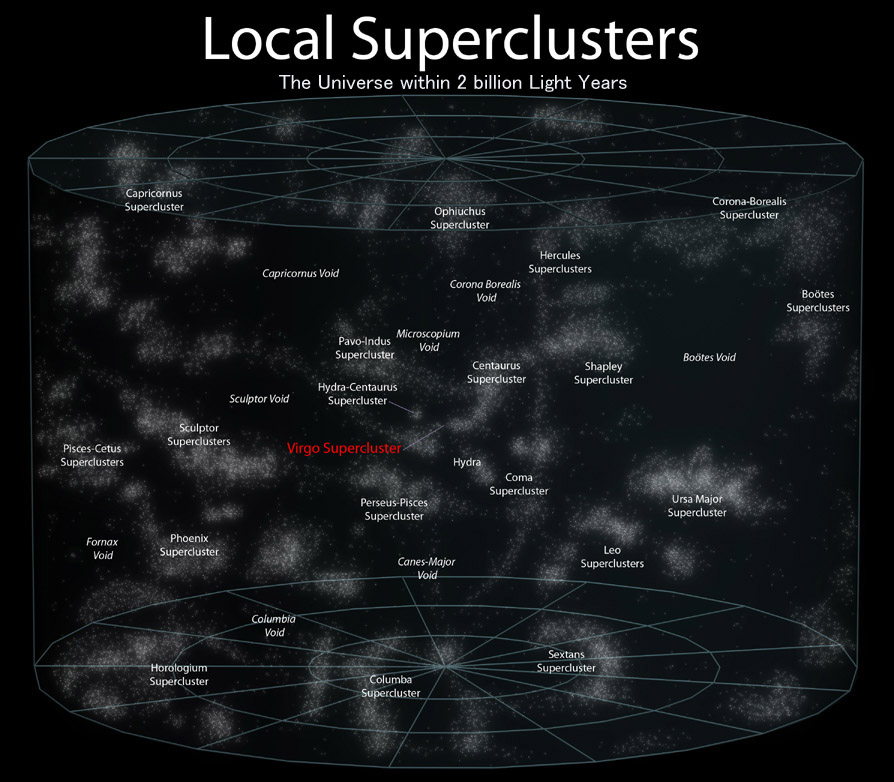 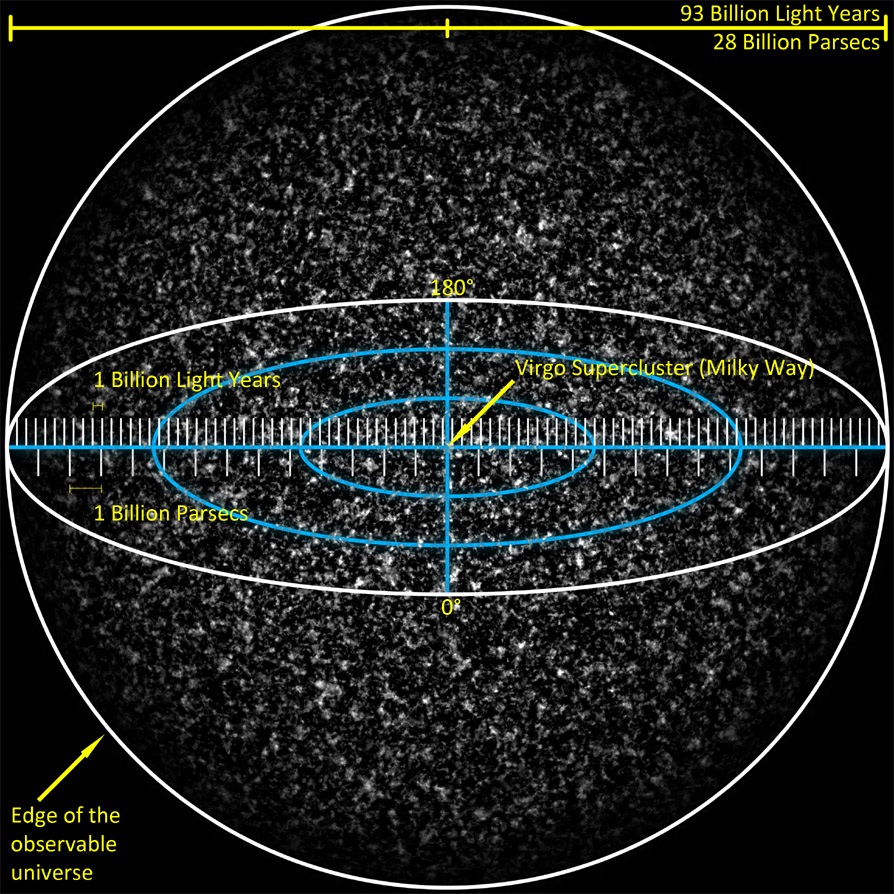 "Blessed is He in Whose hand is the Sovereignty, and, He is Able to do all things. (1) Who hath created life and death that He may try you which of you is best in conduct; and He is the Mighty, the Forgiving, (2) Who hath created seven heavens in harmony. Thou canst see no fault in the Beneficent One's creation; then look again: Canst thou see any rifts? (3) Then look again and yet again, thy sight will return unto thee weakened and made dim. (4) And verily We have beautified the world's heaven with lamps, and We have made them missiles for the devils, and for them We have prepared the doom of flame. (5)" Al-Mulk 67:1-5

The universe versus the observable universe

Some parts of the universe may simply be too far away for the light emitted from there at any moment since the Big Bang to have had enough time to reach Earth at present, so these portions of the universe would currently lie outside the observable universe.

In the future the light from distant galaxies will have had more time to travel, so some regions not currently observable will become observable in the future. However, due to Hubble's law regions sufficiently distant from us are expanding away from us much faster than the speed of light (special relativity prevents nearby objects in the same local region from moving faster than the speed of light with respect to each other, but there is no such constraint for distant objects when the space between them is expanding; and the expansion rate appears to be accelerating due to dark energy. Assuming dark energy remains constant (an unchanging cosmological constant), so that the expansion rate of the universe continues to accelerate, there is a "future visibility limit" beyond which objects will never enter our observable universe at any time in the infinite future, because light emitted by objects outside that limit can never reach points that are expanding away from us at less than the speed of light (a subtlety here is that because the Hubble parameter is decreasing with time, there can be cases where a galaxy that is receding from us just a bit faster than light does manage to emit a signal which reaches us eventually).

This future visibility limit is calculated to be at a comoving distance (comoving distance is defined to be constant with time, unlike proper distance which is used to define recession velocity due to the expansion of space) of 19 billion parsecs (62 billion light years), which implies the number of galaxies that we can ever theoretically observe in the infinite future (leaving aside the issue that some may be impossible to observe in practice due to redshift, as discussed in the following paragraph) is only larger than the number currently observable by a factor of 2.36.

An additional subtlety is that a galaxy at a given comoving distance is defined to lie within the "observable universe" if we can receive signals emitted by the galaxy at any age in its past history (say, a signal sent from the galaxy only 500 million years after the Big Bang), but because of the universe's expansion, there may be some later age at which a signal sent from the same galaxy will never be able to reach us at any point in the infinite future (so for example we might never see what the galaxy looked like 10 billion years after the Big Bang), even though it remains at the same comoving distance which is less than the comoving radius of the observable universe. This fact can be used to define a type of cosmic event horizon whose distance from us changes over time; for example, the current distance to this horizon is about 16 billion light years, meaning that a signal from an event happening at present would eventually be able to reach us in the future if the event was less than 16 billion light years away, but the signal would never reach us if the event was more than 16 billion light years away.

2:255 Al-Baqara
Allah! There is no God save Him, the Alive, the Eternal. Neither slumber nor sleep overtaketh Him. Unto Him belongeth whatsoever is in the heavens and whatsoever is in the earth. Who is he that intercedeth with Him save by His leave? He knoweth that which is in front of them and that which is behind them, while they encompass nothing of His knowledge save what He will. His throne includeth the heavens and the earth, and He is never weary of preserving them. He is the Sublime, the Tremendous. (255)

So, nobody ever could observe the universe, yet a tiny creation of God Almighty.

[031:027]  And if all the trees on earth were pens and the ocean (were ink), with seven oceans behind it to add to its (supply), yet would not the words of God be exhausted (in the writing): for God is Exalted in Power, full of Wisdom.

Is it small or large? Is it “infinite” or does it “end” somewhere? If so, what is beyond its outer boundary? How long has it been in existence? How it is created?

facebook.com/RiazuljannahIslamicComplex
facebook.com/zahid.ikram.official This page has been hacked since 9 Dec facebook.com/groups/pakistandebate  has been closed by Facebook with 300,000+ Members

My mission is to convey the message of Holy Quran by all means to common men. Since we as a Muslim we  use to teach our children how to read the Arabic of Quran, and our children become Hafiz e Quran without even knowing its meaning.